Not to sound jingoistic but unfortunately, the Amarantos 15 Stage Past life regression therapy sessions are this effective in treating chronic medical conditions and I had to resort to this sensational title.

One session of PLRT healed Coccydynia (Pain in Tail Bone) which 85 Physiotherapy sessions followed by around 4 MRIs couldn’t. The patient would sit on a toilet seat to be able to work and was also a young mother of a two-year-old, we can imagine the amount of suffering this medical condition would have brought upon her.

Her turn was decided by a lucky dip and after a brief history taking and some induction practice, the following is the transcript of the session, validated by the Atri batch.

The first reported symptom was overeating, followed by guilt (felt like punishment. )

Below is the script typed on the screen as I was conducting this session, at times explaining the rationale and with experience also predicting what would happen next.

[Text in such brackets is my comments and suggestions ]

Now this is a bit bland

We need to take feedback

You can pace when you get the behavior you elicited

And now we are in Regression Stage 12

Long time since we have taken a feedback

No Mind reading - “You are aware of the sensations around you…”

I will pyramid two inductions

Because I still don’t have the rhythm I want

Now this is how we pace

There is something welling up, but since its a demo I will go through the whole thing

There is some strong emotion which has been triggered, but I will still get her deeper so that it will be analgesic.

So some things are just jumping up for quite some time, let us see what it is

2nd important thing, address stress from the time you see it

See all my questions are neutral, never leading into anything

See the built-up of stress in the body

Nothing but there is stress

We can see how it is difficult to get a flash…

So seek feedback as often as possible]

(text in plain text is client’s words in trance)

It’s okay inside a tunnel

[Heavy built up of stress on the forehead

I am unable to hear … voice is getting feeble]

Some dark images, blur and unable to figure out what it is…

[The forehead is crumbling with pressure

This is I of IDT

[This is all the process of IDENTIFICATION]

[Now anchor to this ENGRAM…]

Maybe I am alone

[So much tension which is unconscious is building up]

The stress builds up from the moment we trigger that flash

This is navigating in a frame

There could be something traumatic lurking in the dark…

We are still in the I of IDT…]

[Smile at something so traumatic now? Well now it’s got traumatic!]

Mother is there and she is wearing a long gown

[Now I am going to distract her for some time]

Now for the bullseye

Mom is old, we stay in a house

[name of the place ]

[Stress will emerge in all sessions

This is resistance, don’t want to go there because it is traumatic ]

I can’t see my mother around…

It’s quite some time since I saw her

[we saw this earlier isn’t it?]

[supper time is to get the social structure ]

Can see sister and husband…

They are very small…

Could be son or daughter they are kids…

Kids have grown up…

[I want to know who they are, but I don’t say they are the son and daughter as that could be wrong or I am leading ]

They are in the house

[we use present tense ]

[we see she skips death, even her own]

[Even the mention of death is terrifying for her]

I am feeling bad leaving them

[Kala is going to give us a grand treat! Make list of all that you want]

Telling them to keep that love alive…

Bond and connection between both of you

[we want the truth so no leading… ]

[I want the relaxation that ensues post-death… ]

Something white spiraling around me

[To her own amazement death is not such a terrible experience ]

[Post Hypnotic suggestions to lock of these states to word, “Relax”]

[we need to seek permission ]

It’s a different house… we had money at the time

The house was better

He is my cousin brother

(Remembered having slipped into another lifetime, where she was an Arab and kicked on the back)

I can see my father now

Good but he is quite

He works for the govt…

[didnt get what she said… something about a band?]

Unable to feeling the attachment with him…

[Since she is visual I can ask her to “look”]

Its a bit fancy, we had different plates to eat

[this is all distraction ]

[do you see this is just like a scratch card… ]

We are in the same house

[Everything I use is in present tense]

[what has happened you had moved the house]

Nowhere to be seen in this house

[this is repression— she just skips death!]

Father is hugging me

[these questions are distractions ]

He says that things will be peaceful

I can sense that he is getting punished!!!

Because of something he may not have done

[remember she overeats and feels punished]

Mother is there but she is not expressive about it,

We have very little to eat, always short of money

[the cemented hut made of stones was the first glimpse — Engram]

We are at the same landscape… I am a bit older

They are my younger brother and sister

We all are together we are good

(Father ) He is getting some punishment…

I am able to peep from the wall…

[this is how we can maneuver through time]

Someone is just shouting…

I want to kill that person

[again dodging the question of her mother’s death]

[to water down the stress, we can use past tense]

[a volcano is ready to erupt ]

[but her body is not reflecting this feeling]

She says that everything is fine

My feelings settled…
I CAN LET HER GO

[I want to know if she is married]

[mothers death — I think now it might not be that much ]

She is holding my arm… she knows that she is leaving

Its the feeling of separation

I am not able to locate it, but I’ve felt

[it’s okay to aggravate the feelings]

I am working somewhere,

[what stopped you from getting married]

My younger siblings, they too young…

[there will be a burnout as she is unable to breathe deeply!]

Can I come back

I am assuring them like my mother did to me…

I m at peace, you are at peace

Keep that bond and love alive…

I could have extended my hand to people, to defeat that loneliness!

I am above my body…

I feel that I have to go

Something else is there

[shall we find out?]

[She is exhausted and we need to respect that ]

Feeling that others are unable to recognize me

The trust on myself that I can go to people

[this is the integration of the clinical psychologists … ]

In the form of protection from my mother

The next day client reported to the entire Atri batch that what had not healed (pain in tail bone Coccydynia) after so many MRI scans and 85 physiotherapy sessions had just vanished!

Below are some of the observations the student shared even after some days with those who witnessed her session. 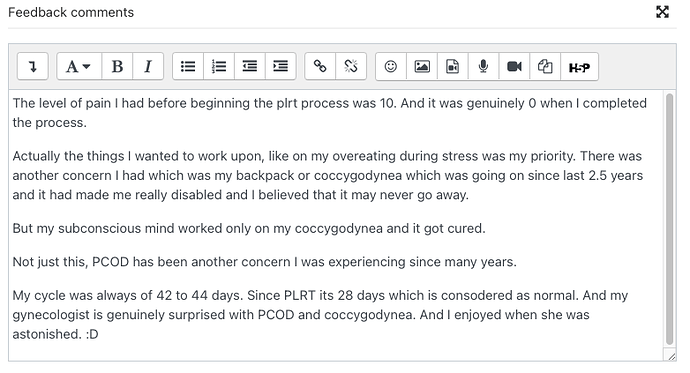 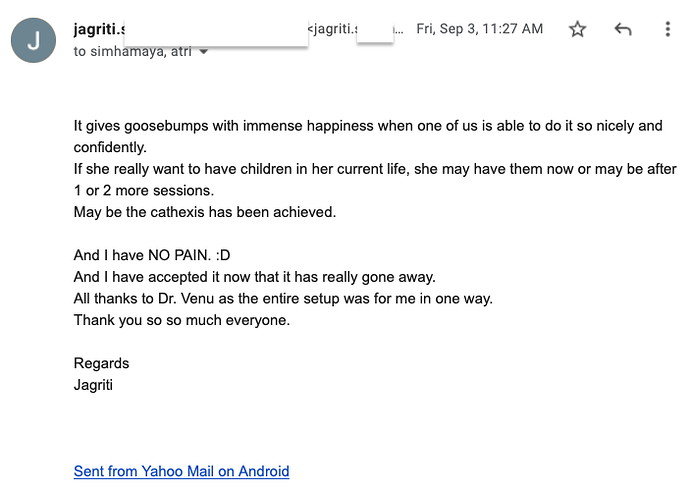 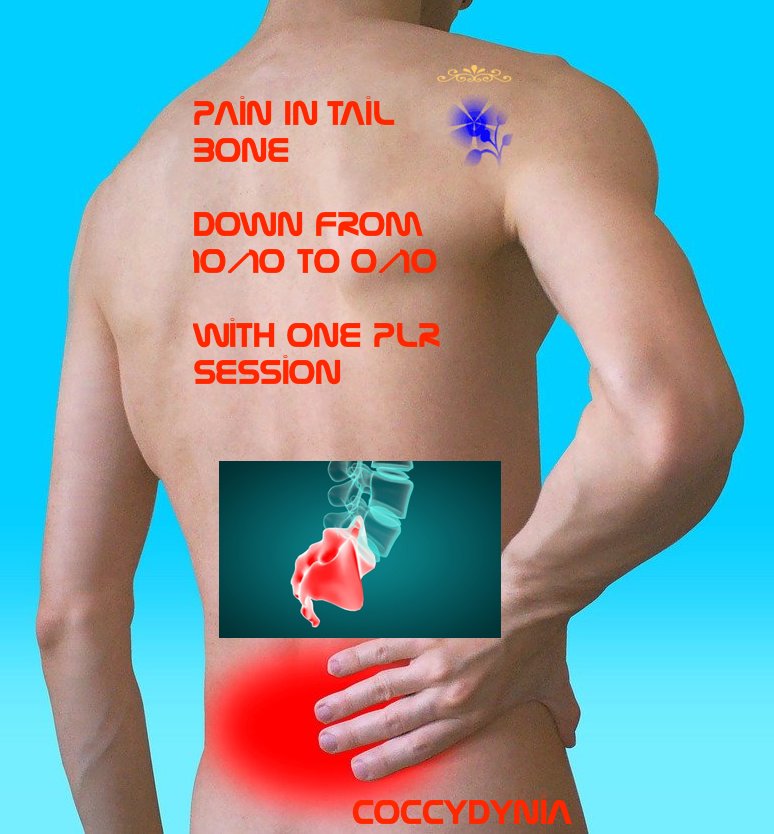 Healing stories continue to flow from the Atri batch attendees such as:-

Ammmmazing Venu…Grateful for all these stories of healing. Giving people the conviction that their inner wisdom knows to heal, with modalities like ours…You are a divine facilitator, Venu!

Being there and being able to see the session was such an awesome experience. It was a great learning and made me realize how much patience and empathy is required to bring such positive changes.

Thank you Venu for sharing this wonderful story of healing. I am sure, this is no less than a miracle for a person who had been suffering from so many years.