The author attributed to this book is Ronald Henry Nixon (10 May 1898 – 14 November 1965), later known as Yogi Sri Krishnaprem. One of the most interesting devotees I am blessed to know about through Sri Dilip Kumar Roy. I had read about him around 20 years ago in a book titled, “Yogi Sri Krishnaprem”

Anyway in his pre-monastic life Nixon was born in Cheltenham, England and educated in Taunton. His blessed mother was a Christian Scientist and his father was in business.

When 18-years-old Nixon became a British fighter pilot in the First World War. During the bloody war a pack of enemies planes had cornered him and he had a miraculous escape, in which a “power beyond our ken” saved him!

Nixon’s experience of death and destruction during the war filled him with a “sense of futility and meaninglessness”. And he enrolled in King’s College, Cambridge, where he studied English literature. During this period he also studied philosophy, and became acquainted with Theosophy, Advaita Vedanta Hinduism, Buddhism, and Pali.

His wish to learn more about the practical aspects of Indian religion was soon fulfilled when in 1921, Nixon accepted the offer of a teaching position at the University of Lucknow, India. He discovered his guru in the vice chancellor’s wife, Monika Chakravarti who looked just like any other normal householder. He accepted her as his spiritual teacher.

And in 1928, Monika feel ill and took vows of renunciation in the Gaudiya Vaishnavite tradition. She adopted the monastic name of Yashoda Ma. Soon thereafter, she initiated Nixon into vairagya, and he adopted Krishna Prem as his monastic name.

What follows then too metaphysical for anyone to comprehend… I feel blessed that I got to read about this blessed man and his Guru Sri Yashodha Ma, reconfirming that it is only the second best in the world who raise to fame, the first ones choose to remain unknown.

Anyway I stumbled upon a book by him recently named, “Initiation into Yoga – An introduction to the
spiritual life” 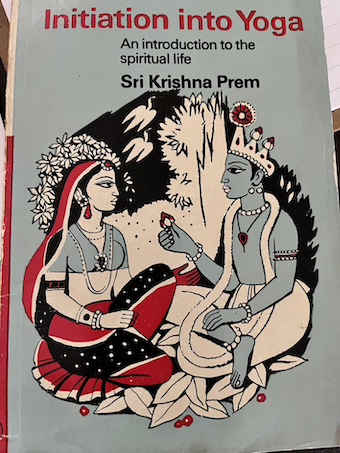 Some phenomenal take way from this book is:

“It has been said before that the mind is like a marvellous mirror
extending through the universe. Unfortunately, it is usually turned
only towards the senses and so reflects only the illusory appearance
of the world.
Never mind the vexed question as to whether the
world is an illusion or not; like most such problems it is a question
of words rather than of facts. The fact is that the world of common-sense experience,
the world of solid material objects, of separate individual selves,
is not the true world, call it what you please.”

“There are no solid material objects; there are no separate individual selves.
All that is illusion, illusion seated in the senses or rather in that aspect
of the mind that unites with them. Even physicists are nowadays
coming to see that it is the mind that creates the world of so-called
physical objects.”

"Philosophers - even in the West - have seen it long
ago, and though the words in which they expressed their insight
were usually, if not always, inadequate and so liable to hostile
criticism, yet it must be always borne in mind by the truth-seeker
that insight does not stand or fall by the words in which it is ex-
pressed. This is one of the most important things for us to learn. The
finger must never be confused with the moon it points to.
This is one of the reasons for the contradictory language so often used by mystics.

"They know that grasp of words will never give grasp of **
truth, and so by contradictions and paradoxes they attempt to force
** such seekers as are educable at all out of their grip on words. They
behave, in fact, like birds who push their young ones out of the
nest so forcing them to use their wings and exchange the limitations
of the nest for the vast freedom of the living air."