A Search In Secret India 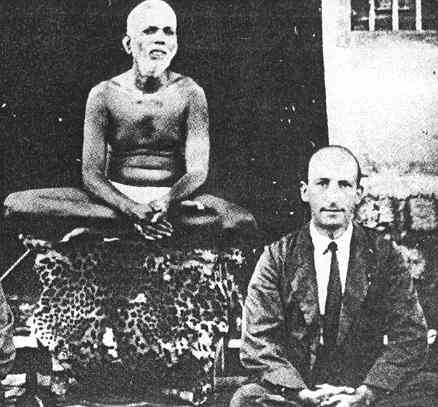 I just completed reading this astounding book written by Sri Paul Brunton (Mr Raphael Hurst)
Which he wrote in 1934.
Of course, the content of his book is the king, but I also love his ornate narration.

I would highly recommend reading this book to experience how eloquently has been able to capture his richest spiritual experience,

The Maharishee’s seated form floats in a vivid manner
before my mind’s eye. Following his frequently repeated
instruction I endeavour to pierce through the mental picture
into that which is formless, his real being and inner nature, his
soul. To my surprise the effort meets with almost instantaneous
success and the picture disappears again, leaving me with
nothing more than a strongly felt sense of his intimate presence.
The mental questionings which have marked most of my
earlier meditations have lately begun to cease. I have repeatedly
interrogated my consciousness of physical, emotional and
mental sensations in turn, but, dissatisfied in the quest of self,
have eventually left them all. I have then applied the attention
of consciousness to its own centre, striving to become aware of
its place of origin. Now comes the supreme moment. In
that concentration of stillness, the mind withdrawn into itself,
one’s familiar world begins to fade off into shadowy vagueness.
One is apparently environed for a while by sheer nothingness,
having arrived at a kind of mental blank wall. And one has
to be as intense as possible to maintain one’s fixed attention.
But how hard to leave the lazy dalliance of our surface life and
draw the mind inwards to a pin-point of concentration!

To-night I flash swiftly to this point, with barely a skirmish
against the continuous sequence of thoughts which usually
play the prelude to its arrival. Some new and powerful force
comes into dynamic action within my inner world and bears
me inwards with resistless speed. The first great battle is
over, almost without a stroke, and a pleasurable, happy, easeful
feeling succeeds its high tension.

In the next stage I stand apart from the intellect, conscious
that it is thinking, but warned by an intuitive voice that it is

merely an instrument. I watch these thoughts with a weird
detachment. The power to think, which has hitherto been a
matter for merely ordinary pride, now becomes a thing from
which to escape, for I perceive with startling clarity that I have
been its unconscious captive. There follows the sudden
desire to stand outside the intellect and just be. I want to dive
into a place deeper than thought. I want to know what it will
feel like to deliver myself from the constant bondage of the
brain, but to do so with all my attention awake and alert.

It is strange enough to be able to stand aside and watch the
very action of the brain as though it were someone else’s, and
to see how thoughts take their rise and then die, but it is
stranger still to realize intuitively that one is about to penetrate
into the mysteries which hide the innermost recesses of man’s
soul. I feel like some Columbus about to land on an uncharted
continent. A perfectly controlled and subdued anticipation
quietly thrills me.

But how divorce oneself from the age-old tyranny of
thoughts? I remember that the Maharishee has never
suggested that I should attempt to force the stoppage of thinking.
“Trace thought to its place of origin,” is his reiterated
counsel, “watch for the real self to reveal itself, and then
your thoughts will die down of their own accord.” So, feeling
that I have found the birthplace of thinking, I let go of the
powerfully positive attitude which has brought my attention
to this point and surrender myself to complete passivity, yet
still keeping as intently watchful as a snake of its prey.

This poised condition reigns until I discover the correctness
of the sage’s prophecy. The waves of thought naturally begin
to diminish. The workings of logical rational sense drop
towards zero point. The strangest sensation I have experienced
till now grips me. Time seems to reel dizzily as the antennas
of my rapidly growing intuition begin to reach out into the
unknown. The reports of my bodily senses are no longer
heard, felt, remembered. I know that at any moment I shall
be standing outside things, on the very edge of the world’s
secret. . . .

Finally it happens. Thought is extinguished like a snuffed
candle. The intellect withdraws into its real ground, that is,
consciousness working unhindered by thoughts. I perceive,
what I have suspected for some time and what the Maharishee
has confidently affirmed, that the mind takes its rise in a
transcendental source. The brain has passed into a state of
complete suspension, as it does in deep sleep, yet there is

not the slightest loss of consciousness. I remain perfectly
calm and fully aware of who I am and what is occurring. Yet
my sense of awareness has been drawn out of the narrow
confines of the separate personality; it has turned into some-
thing sublimely all-embracing. Self still exists, but it is a
changed, radiant self. For something that is far superior to
the unimportant personality which was I, some deeper, diviner
being rises into consciousness and becomes me. With it arrives
an amazing new sense of absolute freedom, for thought is like
a loom-shuttle which is always going to and fro, and to be
freed from its tyrannical motion is to step out of prison into
the open air.

I find myself outside the rim of world consciousness. The
planet which has so far harboured me, disappears. I am in the
midst of an ocean of blazing light. The latter, I feel rather
than think, is the primeval stuff out of which worlds are
created, the first state of matter. It stretches away into
unreliable infinite space, incredibly alive.

I touch, as in a flash, the meaning of this mysterious universal
drama which is being enacted in space, and then return to the
primal point of my being. I, the new I, rest in the lap of holy
bliss. I have drunk the Platonic Cup of Lethe, so that yester-
day’s bitter memories and to-morrow’s anxious cares have
disappeared completely. I have attained a divine liberty and
an almost indescribable felicity. My arms embrace all creation
with profound sympathy, for I understand in the deepest
possible way that to know all is not merely to pardon all, but
to love all. My heart is remoulded in rapture.

Click here to read the complete book online for free.

Venu while reading this book and specifically these set of lines months back, I thought that such words of wisdom can’t come from writing capabilities of the author alone, they are expressions of the gems of silence he witnessed ,experienced ,rather realised in front of Mahirshi. They appear truly to be equanimous with the Metaphysical Meditation poems of Shri Paramhansa Yogananda ji(ref. book-metaphysical meditation). Any seeker when come across such fabulous words of love where he feels the silence within himself, fails to stop sharing it across… and hence whom will he/she will share but the like minded ones. And it is never that one wants to intimate what he read but to share the silence and love he /she felt to read it. Venu, may be I am wrong but this is really what I wonder that all your heart pondered to.
A small kid left his home without letting others know to see the fair, enjoyed himself sometimes with all the objects of enjoyment and merriment, but Alas ! felt lately that he is away from the home, from his beloved one, knowing not the way in, wandering here and there, whom to ask for help, all are busy in enjoying the objects. Yet resolved rather yearning to find the way home …that is the state of bliss, the state of self, oneness finds a light in this darkness, illusion, maya… beloved of the beloved… the Guru, who had treaded this path and handholds to the one who is willing ,not forcing anyone. That is what a Guru may be, a reflection to the God,a light to the path, a Poornima moon as you can’t directly face the sun. Still in mind, a struggle of seeker within himself and with those for whom seeking is not a subject even…madness remains and it is pleasure to be with among such mad ones. These are like landmarks that you are treading on the right path. Pray to the Divine… let this be smooth.

If anyone having problem in getting the full version of this book… as per venu s message… . (Sometimes it shows server down)
U can get it downloaded from The site "Any Books " from play store, download it and get it free … "A search in Secret India "…
enjoy your lock in period valuable

madness remains and it is pleasure to be with among such mad ones.

Thank you very much Jyothi

This book is available in our telegram group…

Sharing experiences regarding Past Life Regression therapy and maintaining an e- library to enhance our knowledge.

Wow… that was great

Thank you very much Nisha ji. But I would say that knowledge applied practically leads to understanding of that knowledge, otherwise it is just a perception of things one come across. Knowledge with application , you are a pillar on that and an inspiration to all of us.

"Ya Vidya sa vimuktaye "
True knowledge /education is that which liberates.

Next in the read for sure.

I am still learning from all of you Sachinji.