As usual in the moming I was praying to God sitting in the Pooja room at home. The flower which I kept on Baba statue fell down and almost rolled up to me. I felt blessed and thanked Baba for blessing me and took the flower and kept it in my pocket, and set out for Radisson where I was attending the PLRT workshop.

That afternoon Venu told us to practice the progressive relaxation on each other, one to one as we had done the day before. On the previous day, I was client and Sachin was my therapist. So, today. we thought of changing our roles. But Venu asked us to do the same roles as the previous day

Sachin was guiding me and was following his instructions. On two occasions, fell asleep during the progressive relaxation and Sachin had to wake me up. Later I started seeing different scenes. But, couldn’t stick to any of them. After that saw a peacock in violet colour, opening its feather. I saw it as a violet circle, then even saw a tree with full of small leaves also in violet colour. Then came back from the trans, because I was unable to stick to any scene. Then Sachin told me, maybe the violet circle is significant to a chakra of mine"

In the evening Venu was asking us about our experiences As we shared our experiences. I mentioned that I was initially not able to visualise while in progressive relaxation, but after sometime, I saw many scenes Even few others also shared their experience similar to mine where they could not see anything or said they saw multiple scenes. So Venu decided to regress one of us to demonstrate it. The person to be regressed would be selected out of the lucky dip. As luck would have it, turned out to be the fortunate one and I sat on the hot seat

Venu asked me to recall the peacock scene and wanted to regress me from there. So recalled the peacock scene. I saw a peacock but in its natural colour rather than as I saw it earlier in violet colour. But I was not able to move forward and only kept seeing the peacock. After some time, saw a military troop laying on the ground and firing at enemies. I couldn’t find out myself there. They were in Indian military uniform and also saw the other group in a different uniform. tried to find out if I was there and I saw a different scene in which saw a hut made of wood, that was at 15 to 20 feet height in a forest. saw the Indian military troop was waiting for the instructions to fire and were aiming their guns, Venu told me to look at myself to identify. Now I was able to see my shoes and I felt like I am commanding them but couldn’t see myself. I was feeling like I need to go deeper into the trans.

I asked Venu to relax me more but it couldn’t help me to investigate further about that life, so he decided to take me to my childhood. Then went to my childhood where I could see my school and play ground. After some time, saw myself playing in the ground with my friends. I felt it was my 7th- standard but can’t see my uniform colour. Again, there was no continuity and was feeling still need to go more deeper into the trans to see everything clearly I thought of asking Venu to do Dave Elman. At that time Venu asked me, would you like to come out of the trans. But I said no and I prayed to God to give me an opportunity to utilize this chance.

Then Venu asked me to tell any one issue to work on that, then I told him about my fear of pain in my lower back which had around 15 years ago. Later it was cured by Ayurvedic Panchakarma treatment. But I am still not sure if it is cured completely.

Again, went into the trans Venu told me to go to the significant event which is related to my pain Then I visualised a bus going on a hill and felt I am in the bus as a passenger but couldn’t see myself and couldn’t identify the place either. It was not in India, the bus and the other passengers are different they were not Indians. Alter this scene I was floating and going up. Venu told me to see what happened to the bus. But couldn’t see what happened to the bus. But could see and feel again and again that I was in that bus and something had happened to the bus, maybe, it is fallen from the hill. So, tried to see my body, then saw some bodies coming in ambulance, this was outside an hospital. Then I saw many bodies in one big hall inside that hospital but couldn’t identify

Later again I started going towards the sky. When I reached above the clouds. I saw something like a plane. Venu asked me what are you carrying from this life, I said am feeling that I carried the pain. Then Venu asked me, would you like to resolve the pain issue there itself or you still want to carry forward. Then I decided to end it there itself and prayed to God. Then I went back to a place there I saw the bus fallen down. I again prayed to God that I want to end this pain issue there only. Then an strange kind of machine came to that place where the bus is fallen and there something started buming I felt my pain is burning there. After that again I went to the sky above the clouds. I saw the plane kind of thing and went inside. There I saw many souls, all are in different form Can’t see anyone’s face. Souls were almost looking Like Vodafone zoozooloys

After that I saw few new bom babies. I felt, I have taken another life. But immediately after that saw myself again in the sky above the clouds. This time the plane was going away leaving me alone in he sky. The sky was blue, Venu told me to see, is there anyone wanting to contact me. I saw all around me, but couldnt find out anyone. I was trying to find someone all around the sky then realized no one is there to stop me. So decided to explore the sky, I started going above and up in the sky.

I was feeling that I was traveling at very high speed, may be light years. I saw many galaxies, many stars, I was feeling like am crossing lakhs of stars in seconds after sometime I reached a certain point and it was looking very different. I saw many places afar that. Each one was different from the
other and all were unique (cant describe in words) And in one place I saw some sages, then Venu told me to take their blessings, but couldn’t communicate with any of them I can only see them. I also felt like they were also not noticing me, I was surprised, no one is stopping me. I can go wherever I want. Then Venu told me, see if you can get any messages from the sages. Then I saw some sages performing Pooja to a small black Shivalinga. I tried to communicate with them for the messages. Then they just showed me the Shivalinga holding in their hands for which they just did Pooja.

Then I moved from there again, I was seeing different dimensions (lokas). At one place I saw a big golden door, either sides of the door, a grand art in gold. I felt it should be the entrance for Swarga (Swarga) or Vaikunta. I went inside. I saw trees, bushes and flowers glowing bright in different colors. Cant explain in words. More than graphics. I couldn’t see anyone there. So, I started flying and I reached a place where everything was dark, very dark. Aftar few moments I saw a glowing golden Simhasana (Throne) floating, in which Lord Vishnu was sitting. I couldn’t see his face but saw the colour of his body and it was blue. So, felt it should be Lord Vishnu. Soon I saw one more glowing golden Simhasana floating, in which Maa Sharade was sitting weaning white saree. I saw Maa Sharade very clearly. Then I saw a glowing lotus floating, but couldn’t see Maa Lakshmi in it. Then saw Lord Vishnu going on Garuda

Then Venu told me to pray for everyone and ask for blessings. I did so. After a while, Venu asked me, do you still want to be there for some more time or do you like to come back. I told Venu, I want to see Lord Shiva also, and until that happens, I don’t want to come back. Then started searching for Lord Shiva. After some time, I reached a place where everything was in ash colour (grey) and I saw a huge Shivalinga and a big snake head above Shivalinga everything in ash colour.

But I was not satisfied and I told Venu, I want to be there for some more time. Still I was searching for Lord Shiva. I wanted to see him directly. Then I reached a place, where everything was black and dark. There I saw two huge/very big eyes just opened and the eyes are looking at me. I was happy and also scared. It is like watching two full moons in the dark sky. I couldn’t see the face but felt like it was Lord Shiva only.

Then I thought finding Lord Shiva is not so easy. But, felt that I was blessed to be there and to see all this. Then I decided to come back. But inside me I was feeling that if this was my house, have stayed here and not come back at all.

Thank you Venu for the wonderful experience. 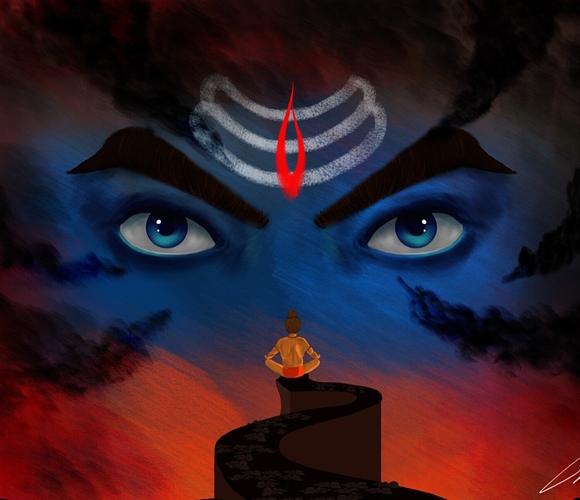